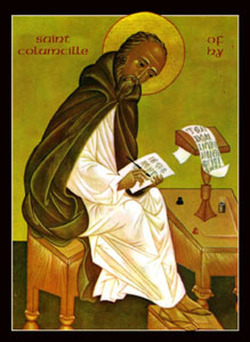 Over the centuries, Ireland has produced many saints including the great Saint Patrick, Bridget, and Columba. Out of these three, Saint Columba (also known as St. Columbkille) has the reputation of being the most ‘Irish.’

Columbkille was born as Colm, meaning dove, in Donegal, Ireland in 521 A.D. to a family of Irish aristocracy. Since he was a direct descendant of Niall of the Nine Hostages, Columba was part of a lineage of kings who had ruled Ireland for six centuries. Columba, himself, might have had succeeded the throne if he had not found a calling in the Church.

At an early age, Colm was introduced to a religious life since he was given in fosterage to a priest. During this time it was Irish custom to entrust a child to foster parents, and under his fosterage, Colm’s faith grew immensely. He studied with two different saints and became a monk, which led to his ordination. Colm then used his wealth to establish 27 monasteries and 40 different churches. He had done all this before he had turned 25, thus he acquired the name Columbkille, Colm of the Church.

Despite all of his achievements, Columbkille did not escape the political infighting that had ensued. During this time, war had broken out between Ireland’s clans. And because he had fiercely protected refugees and denounced King Diarmaid, Columbkille was put into self-exile in 563 A.D.

With the situation worsening in Ireland, Columbkille experienced a religious awakening and found himself called to preaching. He traveled to a desolate island, only 3 miles long, where he established the monastery of Iona. From this monastery, he began to work to introduce Christianity to Scotland. Columbkille’s monastery eventually became “heart of Celtic Christianity and the most potent factor in the conversation of the Picts, Scots, and Northern English,” according to the website, www.stcolumbkille.org.

St. Columbkille died in 597 A.D., having a great influence over Christianity in Western Europe. Because the monks who had trained at his monastery traveled all over Europe, the monastic rules he developed were widely practiced. Although the Rule of St. Benedict ultimately supplanted many of his practices, Columbkille’s influence can still be felt today. Thanks to the work of Columbkille, among others, Britain has a largely Christian population. Columbkille is also the patron of the Knights of Columbus, a worldwide group of men dedicated to living a Christian life. The feast of St. Columbkille is celebrated on June 9.
© 2019 St. Columbkille School
Proudly powered by Weebly