Eric Rodriguez graduated from St. Columbkille School in 2007. He then attended Loyola High School where he graduated in 2011.  Eric is currently attending Yale University and will graduate in 2015. His major is in Political Science.  After Yale he plans  on attending law school and becoming a lawyer.  Eric would love to one day be a California Senator in order to enact meaningful, positive change for Californians from all walks of life, and for the nation at large.

Eric is currently a marketing associate and the Chief of Staff for The Sports Quotient, a start-up multimedia sports site. He interned at a Congressional office in the summer of 2012. His summer internships have taken him to London and San Francisco as well. He currently volunteers for Ready Set Launch, where he guides a high school student through the college application process (last year, the student he helped got a $200,000 full-ride scholarship!).

When asked how St. Columbkille helped him, Eric stated:

St. Columbkille engrained in me the belief that I should use my time and talents to better my community and to care for disadvantaged members of society.  In this sense, St. Columbkille provided me with the firm academic and spiritual foundation necessary to put myself in a position to achieve these goals."

David Gomez was born on September 12, 1940 in Los Angeles, California. He graduated from St. Columbkille School in 1954 where he attended since first grade.  In 1958 he graduated from Our Lady of Mount Carmel High School. In 1961 he began employment with the County of Los Angeles, County Clerks Office.  He also wed his lovely wife Angelina Salido in 1961 at St. Leo’s Catholic Church in Compton.  In 1967 he was hired by the Los Angeles County Sheriff’s Department as a Deputy Sheriff Trainee and in 1968 he graduated top cadet from the L.A. County Sheriff’s Academy. His first assignment was in the Temple City Sheriff’s Station but after being promoted to sergeant he was assigned to the Pico Rivera Sheriff’s Station.  Understanding the importance of higher education, Mr. Gomez received an Associate in Arts Degree from East Los Angeles Community College in 1971, a Bachelor of Arts Degree in History from Cal State Fullerton in 1978, and a Masters Degree in Public Administration from the University of La Verne in 1991.  His continued promotions in rank took him to Altadena’s Sheriff Department as Lieutenant, Captain in the Internal Affairs Bureau, and Area Commander in the Fields Operation Division.  In 1996 David retired from the County of Los Angeles after serving 30 years in the  Sheriff’s Department and 6 ½ years in the County Clerk’s Office.  His greatest accomplishment has been the family he has and his wife, Angie, have created.  David has three wonderful daughters; all have earned college degrees and have successful career.  Suzanne is the Information Technology Manager at a large engineering firm, Sandra is a Speech Pathologist, and Laura a Professor and Student Counselor at a community college.  This was in thanks to the example Angie and David provided. He has six beautiful grandchildren (Joey, Steven, Javier, Lily Elena, Ava, and Reece) who excel academically.   David Gomez was honored as Distinguished Alumni of the Year on November 4, 2012 at St. Columbkille School for his contributions, dedication, and commitment to the children of St. Columbkille. 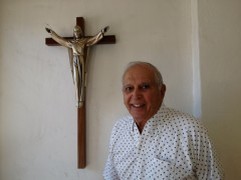 Anthony Valencia was born on August 26, 1927.  He attended St. Columbkille School starting in first grade and graduated in 1940.  He attended Huntington Park High School and graduated in 1944.  While participating in the many activities provided at St. Columbkille Church, he met his lovely wife Lenore in 1943.  Mr. Valencia was president of the Kyro Club at the time.  Upon graduating from high school, he was eager to participate in World War II so he enlisted in the military. He bravely served in the maritime service between 1944-1946 and the United States Army between 1946-1948.  Between his short break in the maritime division and the U.S. Army, he married Lenore at St. Columbkille Church in 1946.  After completing his time serving our country, he began working at Arrowhead Waters as a truck mechanic.  He simultaneously attended the University of California at Los Angeles where he received a degree in business administration.  He was then promoted to the National Director of Fleet Operations. He worked at Arrowhead Waters for 41 years and retired in 1989.  In addition to his full-time job, Mr. Valencia became a successful real estate investor and developer.  Concurrently to his professional life flourishing, his personal life continued to grow and thrive as well.  Mr. Valencia and his wife Lenore adopted three wonderful children Timothy, Denise, and Wayne.  He has always believed in living a balanced life as evident in his various hobbies including hunting, fishing, golfing and traveling worldwide to 71 countries.  Mr. Valencia and his wife Lenore have been happily married for 66 years and celebrated their 65th wedding anniversary at St. Columbkille last year.   Anthony Valencia was honored as Distinguished Alumni of the Year on November 4, 2012 at St. Columbkille School for his contributions, dedication, and commitment to the children of St. Columbkille. 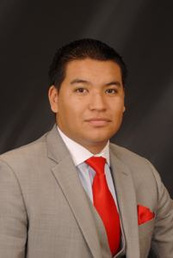 Andres Pio graduated from St. Columbkille in 2002. He attended Loyola High School then went on to USC. During his undergraduate studies Andres returned to St. Columbkille with a group of volunteers to tutor students and help with the Academic Decathlon team.

Andres graduated from USC in 2010 with a B.A. in Political Science and is currently working for Morgan Stanley Smith Barney. When asked, What did you learn at St. Columbkille that still makes a difference for you today? Andres answered, “I learned about the importance of having a Catholic education in becoming a distinguished individual in society; combining work ethic and ambition with morals and values.”

Andres participated in our 1st Annual Awards Dinner as he helped present the Sr. Peg Dolan Award to Bob Kerslake. We are extremely proud of Andres. He is a true role model for our students.
Please tell us where you are and what you’re doing. To be a featured alumni please
e-mail: principal@columbkille.org
© 2019 St. Columbkille School
Proudly powered by Weebly